Images completed project by Erik Stekelenburg Short History The Ravelijn "Op den Zoom" is a fortress-island of the city of Bergen op Zoom in The Netherlands which is made in the beginning of the 18th century by Menno van Coehoorn, a famous fortress builder. This is the only "ravelijn" of him still present. The fortress was originally only accessible by boat , so supplies and soldiers had to be rowed the 80 meters to the fortress. The original entrance is still present just above the waterline At the end of the 19th century the fortress lost its defensive function. In 1930 a raised wooden bridge was added. Nowadays the island-fortress is mainly used for small public and private events. The assignment The assignment was to make a second pedestrian bridge for two reasons. First to connect the fortress to the city centre, second to make a second escape route from the fortress in case of emergencies. Concept In former days, the Ravelijn was supplied from the city with small rowing boats. The concept of the bridge is, to let the bridge follow the original track of these boats, so the bridge echoes the former route the boats followed from the city to the fortress. That is why the bridge snakes across the water to the fortress. Therefore we also made the bridge floating. An additional advantage of that is , that in winter the bridge can be pulled to the side, so there can be ice-skated around the fortress. The deck of the bridge is convex to let the bridge blend in with the water and the surroundings. No mirror image in the water and as close to the water as possible. The stairs at the jetty near the fortress can move up and down (and stay horizontal) with the water level. Material The bridge is made completely to the principles of the Cradle to Cradle philosophy. Air-filled polyethylene pipes positioned underneath the timber surface help keep the bridge afloat, without requiring any additional structural framework. The decking is made of Accoya, a high-performance wood product, which is treated to improve its ability to resist fungal decay, and the effect of swelling and shrinkage that could result from its proximity to water. In the future the bridge can be easily disassembled and recycled. 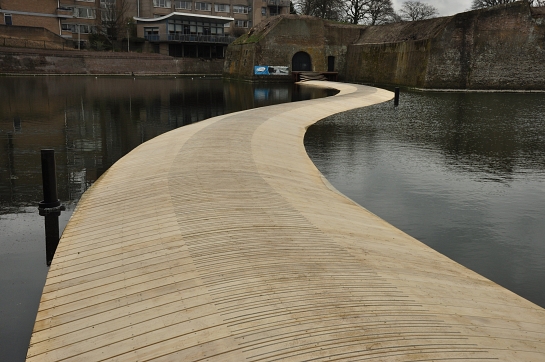 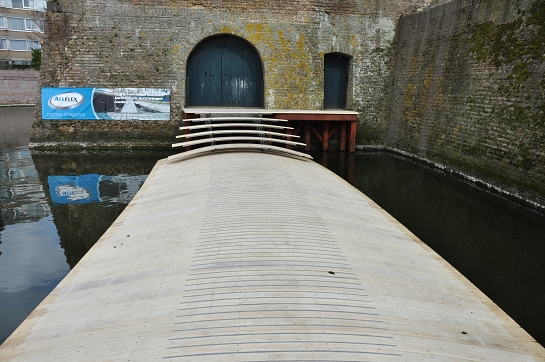